Posted on July 14, 2016 by raffaella  - Read this page in italian, portuguese 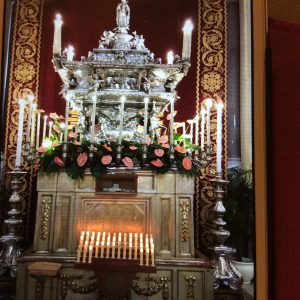 Santa Rosalia’ s celebration is going to start!!
Palermo and its citizens are going to celebrate their Patron Saint,Rosalia ,who saved the city from the plague on 1624… And since then …every year Palermo turns to be the most popular scene of devotion and tradition!
A huge parade with thousands of people will be following the big charriot where Rosalia statue will be standing blessing Palermo and its citizens!!
Singing,praying,shouting aloud “Viva A Santuzza,Viva Santa Rosalia”
Take part of it!
Share with me such strong emotions!!

This entry was posted in Eventi, Luoghi. Bookmark the permalink.